CEMEX will supply 40,000 m3 of ready-mix concrete to support the Panamanian government's efforts to turn around one of Panama's less advantaged neighborhoods: Curundú. The project is being funded by the government and construction efforts were placed in the hands of the Norberto Odebrecht construction company.

Curundú is located inside Panama City and suffers from poverty, crime, unsanitary conditions, floods, and a serious housing problem. Many residents live in improvised housing made of materials like wood and zinc. The national government's proposal for rezoning and urbanization aims to turn Curundú into a self-sustaining neighborhood integrated with the rest of the city. The project will provide residents with adequate living quarters as well as community infrastructure to promote sports and culture.

The project is valued at US$94.3 million and will include housing for 1,000 families distributed among 62 four-story buildings. A 2,000 m2 commercial area will also be constructed in order to foster the local economy through micro-businesses. In addition to these, 18 parks and fields along with green areas, a cycling track, and an amphitheater will be put at the disposal of the residents of Curundú. CEMEX will also supply ready-mix concrete for infrastructure construction which includes 2,000 meters of internal roadways, anti-flood work on the Curundú River, and the construction of a network to provide clean water for the residents of the area.

CEMEX will provide innovative building materials such as self-compacting concrete (SSC) for home construction because it has a better aesthetic appearance and is easier to work with, helping the project stay on schedule and keeping costs as low as possible. Work on Project Curundú began in April 2010, and will end in April 2013. 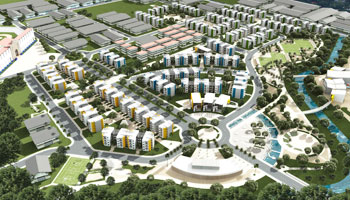